On October 29, 2016, I ran my third marathon in the mountains of North Carolina.The Peak to Creek Marathon is a bucket list race for many runners.

This marathon is unusual, since it is mostly downhill.

Who wouldn’t want gravity on their side in a marathon?

I started my training for this marathon in July. This is significant since I trained largely in the fall and winter for my previous two marathons. This summer happened to be a hot and humid summer. My long runs were difficult. Hitting my goal paces was difficult. There were mornings when I could not get up early enough to run and beat the heat and humidity. I also changed training plans for this marathon. I used the Hanson Method this time. It focuses on teaching you to run on tired legs, which is what you have at the end of a marathon. With 3 days a week of intensity running and 3 days a week of easy running. I learned a lot about my pace. I also used a Garmin 225 which tracks a lot of data, including my heart rate. It would show if I was pushing too hard on my easy run days.

Because this marathon was going to be held at a higher elevation than where I live, I also trained there a few times over the summer. I also trained in a few other mountainous areas of Western North Carolina. These training runs were often 10 degrees cooler than where I live, so it served a few purposes in my training plan (higher elevation and cooler). The first time I ran part of this course, I discovered I would have to learn how to land properly to go downhill for an extended period of time. I was sore for several days after that training run.

I have a great community of local runners. Most of them are race ambassadors with RunTimeRaces. I have known most of them for a couple of years, and they would run some of my long runs with me. It helps so much to have friends who encourage you and will run with you in the heat of the summer.

Leading into the race week, I cut back my miles and intensity runs. I had some slow, easy runs, and the weather had finally cooled off a little bit. When I started training, I had a goal finish time in mind. As I did my easy runs the week before the race, I figured out that I was going to be a little slower than I wanted to be, but I had to keep a pace that I could sustain for 26.2 miles. The big temptation in any race is to take off fast, but I really thought on how I wanted to run this marathon. I broke it down into the first 10K (miles 1-6) of the race, the second section (miles 6-16) being mostly downhill, the third section (miles 16-22) which was flatter, and the finish (miles 22-26.2) which was mostly downhill with a couple of little uphills thrown in for fun.

I decided on what to wear based on the weather report. It was going to be warmer than I expected. I also had to decide on how to hydrate and fuel. The course had 10 aid stations that provided various things, such as water, gatoraide, and gels. Historically, I have had issues with gel and gatoraide durng my long runs, so I planned on taking my handheld water bottle with Tailwind mixed into my water. Tailwind is made for endurance athletes, and it does not cause me stomach distress. I also packed two zipper bags with gummy bears to give me carbs and a little sugar along the way. I used the aid stations just for water, and I used the Tailwind and gummy bears for energy. I have learned a lot about hydration and nutrition since my first marathon. 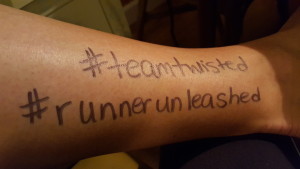 The night before the marathon, I wrote with sharpie on my leg. I have a running friend who has overcome a lot of odds to run, and she inspires me every day to #nevergiveup. She has dealt with some serious health concerns this year, and I dedicated a lot of my training miles to her, and I dedicated this marathon to her. Check out her blog at Runner Unleashed.

The morning of the marathon, I had a really early wake up call. I had to be at the race finish area to ride a charter bus to the top of the mountain to the start line. The buses started leaving at 6:15 am. I had an hour’s drive to get there. So I left my house before 5:00 am. I had my usual pre-race breakfast: bullet-proof coffee (coconut oil and butter) and bacon. I also packed several water bottles and a protein bar to eat 45 minutes before race time. I made it to the area where we boarded the buses and enjoyed the stars.

The ride up the mountain took 45 minutes and was uneventful, other than the light not working in the bathroom on the bus. I tried to rest, but I was a little excited. So I just thought about what I was getting ready to do, and I was thinking about my paces. Mainly, I was thinking, “Do not go out too fast.” Some of my friends who trained with me over the summer were on the same bus, so we chatted a bit after we were dropped off near the start line. We had about an hour before race time, so we did the normal prep stuff — porta potties, stretching, warm up walking, view the sunrise, drop off our drop bags, etc.

With 5 minutes until race time, I made one more stop at the porta potties because I knew it was going to be a long time until I saw another one. We had the opening announcements, and then we were off!

I held onto my paces for the first 6 miles. I was a little slower than I wanted to be, but I knew that I needed to reserve energy. The air was still cool, and the sun was beautiful coming up over the mountains. I kept my sweatshirt on until close to the 3 mile mark. Then I dropped it at an aid station. It was warming up quickly.

After mile 6, we started the 10 mile downhill section. This is where you want to run a little faster, but you don’t want to go at top speed. I kept my paces very even through this section, and I hit a personal record for my time at the half marathon point. I was feeling great, and I was using my hydration and fuel as planned. 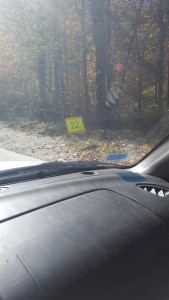 As I came off the steeper incline, I was still coming down the mountain, but it was much flatter. I still held the paces I wanted from miles 16 to 21. At mile 22, I could tell I was fatigued. A running friend joined me and helped me soldier on for the next 4+ miles. I was a little slower than I wanted to be on miles 22 and 23, but I knew I only had 3.2 miles left. So I dug deep and pushed my pace a little faster. I also hit a little bit more of a downhill, so I relaxed into the run and kept my breathing under control. I had run with my friend a lot, and she was encouraging me as we kept going. I was passing a lot of people in those last 5 miles. It was getting hot, and the dirt road was dusty. 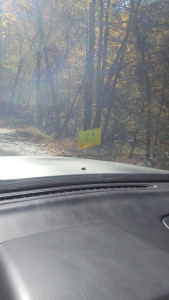 I kept counting down the miles. I counted the songs on my iPod. For every three songs, I would finish a mile. At Mile 25, I was close enough to the finish to see and hear people. I also knew that I had to run the last mile looping through the parking lot and past my car. There is nothing harder than being that close to the finish and running by your car. (I went back later to take pics of these last mile markers.) 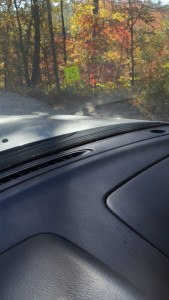 My friend took pictures along the last mile and at the finish of the race. 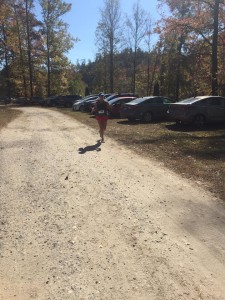 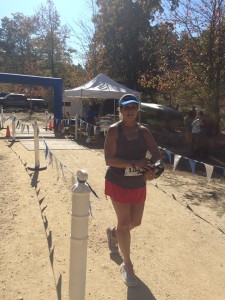 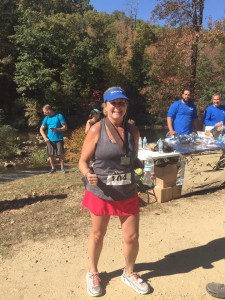 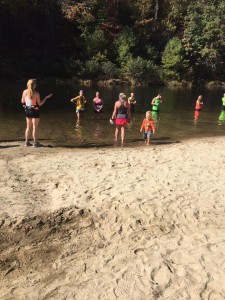 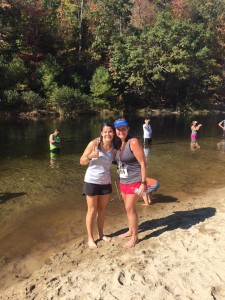 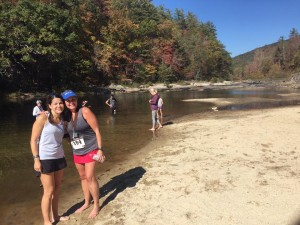 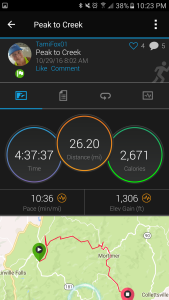 I finished the race in 4 hours and 37 minutes. I estimated earlier in the week that I would finish in 4 hours and 36 minutes. I was very close to my estimate. The second half of the marathon was only 2 minutes slower than the first half of the race. My pacing strategy paid off. I cut 28 minutes off my last marathon finish time, so I had a big, fat personal record for this marathon. I accomplished some really big goals with this race. I could not have asked for a better experience. I appreciate my friend, Kimberly, for coming out and supporting me and taking pictures. She kept me accountable to my training plan. There were several others who supported me and pushed me to keep trying. My family was supportive and was gracious to me as I put in long hours training. My youngest son kept up with my training plan and paces. He would always encourage me to try a little harder each time.

I highly recommend this marathon. It has a small field of 300 to 400 runners per year. It has a great race director who keeps you informed along the way. Peak to Creek Marathon, Jonas Ridge, NC.