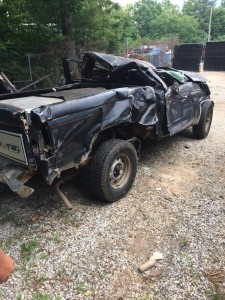 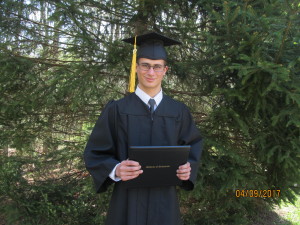 One year ago today, we got a phone call that changed the course of the past year.

Some stories are written on our hearts, and it takes time to be ready to share the story. There are a few times in the last year that I wasn’t sure if Jacob would live to see this day. His life was spared more than once. I know God has big plans for him. He was not ready to bring him Home to heaven last year.

May 30, 2017, Jacob was involved in a car accident. He struck a truck that ran a stop sign, and his truck rolled over 5 times. EMS called our home when en route and asked us to come since Jacob had a few abrasions. They did not make it sound serious, so I went alone and called his girlfriend to meet me there. Once I arrived, I quickly surmised that his injuries were more serious than a few abrasions. He has been taken immediately to get a cat-scan. I was asked to sign a permission slip for a blood transfusion.

My first sight of him is something I will never forget. I can’t even describe it for you, but I knew he was injured badly. He had nicked an artery in his scalp and lost of a lot of blood. His blood pressure was very low. They worked to stop the bleeding and ascertained that his injuries were more serious than they could manage at our regional hospital. I was asked which trauma center we preferred for his transport. This was within 30 minutes of arrival.

After I made the decision, I made some phone calls and stopped by my mother’s house to pick up some water bottles and snacks for my ride to the trauma center an hour and a half away.

He was transferred quickly from regional medical center to the trauma Emergency Department to a room on the trauma unit. During all of this, he was not given anything for pain because of the low blood pressure. As a parent it was hard to watch my child be in pain and be unable to do anything for him. I prayed a lot. I advocated for him. I was his voice when he had no voice.

The first 24 hours were tough. He eventually was given pain meds, but he was not alert for most of the first 24 hours. I did not leave his side and neither did his girlfriend.

After the first 24 hours, he started responding and talking more. We worked on cleaning up his head and hair that were terribly matted with dried blood. My husband brought our other children to see him. It was hard for all of us to see Jacob this way.

As he approached the 48 hour mark, he had greatly improved. He passed neurological tests. He had many x-rays, and he did not have any broken bones. His swelling near his heart abated. His main injuries were the head injury and a shoulder injury of the shoulder that was not restrained by the seat belt.

After he was discharged, I brought him home to start his recovery process. He had just started a new job, and that was difficult to navigate with their human resources department. He had injuries that required follow up appointments. After many phone calls, I learned how difficult it is to be seen for injuries related to an automobile accident. I spent days on the phone trying to make appointments. It was frustrating. I finally found an orthopedic doctor who would see him for the shoulder issue.

As he recovered from the head injury and concussion, he went through a lot of difficult days. Pain, depression, and injury are not easy for anyone to manage. As we were able to see more doctors for the different injuries, he was given pain management protocols. This is a dangerous combination for someone who has a family history of depression and addiction.

As the summer progressed, so did his depression. He was unable to work due to the pain and injuries. One doctor appointment often led to no answers and two or three more appointments. My schedule quickly filled with appointments for him. I was managing paperwork, and I was driving him to his appointments.

He was finally released to drive again, and he was able to take himself to appointments. He was seeing a physical therapist for the shoulder injury. He was getting adjustments with our chiropractor. He was seeing an orthopedic doctor and our family doctor. He sank into further depression. As the pain medication refills were used and not renewed, he found other ways to escape the pain and depression.

For several weeks, we did not know exactly where he was. I could see from his bank account that he was using his debit card. He would reply to my text messages occasionally with promises that he would be home that night. Days would go by with no communication from him. It was one of the hardest valleys of my life.

But this valley was going to get harder for all of us. Join me tomorrow for part 2 of his story. Part 3 can be read here.