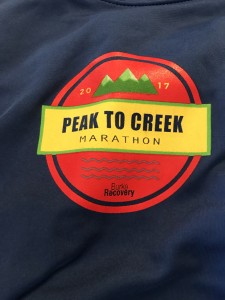 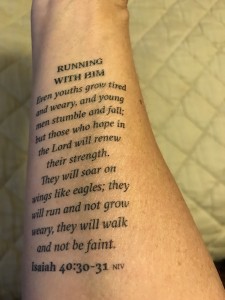 Recently I ran my 5th marathon. Yes, I paid to run 26.2 miles down a mountain. Some might call it crazy. I call it my sanity.

When I started running almost 5 years ago, I could not imagine wanting to run 26.2 miles. Somewhere along the way, I got the bug to run long distances.

I signed up to run Peak to Creek for a second year in a row because I love running downhill. It’s harder than you might think to run down a mountain. You have to learn to land well, or you will really hurt later.

The weather forecast leading up to the race was not looking good. I debated all week about running it. It’s a packed gravel surface for most of the course, and they were projecting rainfall on Friday night and Saturday morning. As the day approached, the forecast started looking better, but I knew that there was a high chance of rain during the race. I train in the rain, my concern was mud and the elevation loss. I did not want to slip and fall.

On Friday, I started putting my stuff together for the race. You would not believe the amount of stuff I pack for a marathon. I picked out two sets of running clothes, depending on the weather when I got up. I packed extra clothes for after the race. I packed a jacket and gloves that I could toss at an aid station. I packed a drop bag because we parked at the bottom of the mountain and were going to ride a shuttle bus for 45 minutes up the mountain. I packed water and breakfast. I packed my sport jelly bean and salt tablets. I laid out my hydration belt and handheld water bottle

Later Friday night, I set my alarm for 4:00 am. I has everything laid out and ready to go. The coffee pot was set up. I slept really well that night.

On Saturday morning, I got up and checked the weather app first thing. It was cool at 41 degrees, and it was not raining. I had a quick breakfast and decided on my running clothes.

It was an hour’s drive to the venue, and it was a nice peaceful ride to think about what lay ahead.

Once I arrived and parked, I gathered the things I needed to take with me, and I hopped on the shuttle bus. Out of all of the runners in this race, I saw a friend on the bus and sat with her. The ride passed quickly. I was not feeling nervous. I was excited to see the culmination of 16 weeks of training. 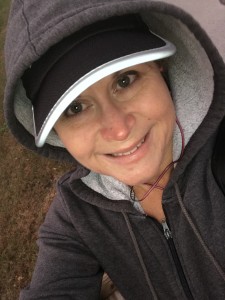 Once we got off the bus, packet pick up was well under way. I got my race bib and timing chip. I drank my water and had my second breakfast. The lines for the porta potties were long, so I decided it was time to get in line. I enjoyed talking to some of the runners around me in line. It’s such a neat thing to meet people from around the world at a race. 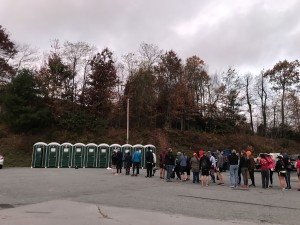 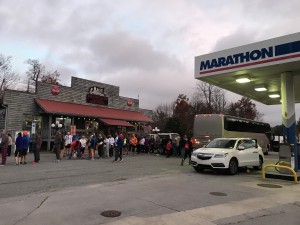 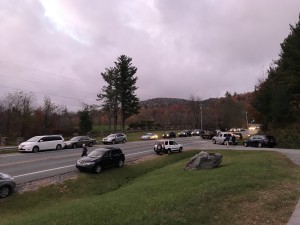 I still had time before the race, so I did my stretching and a few warm ups. It was quite windy and cool.

The runners started making their way to the start line. There is not a lot of fanfare or announcements with this race. In no time at all, we were off and running.

The first 6 miles of the course are rolling hills. My head was not quite in the race mode the first three miles for some reason. I just relied on my training, kept breathing, and kept moving. I kept an eye on pace and did not get caught up with trying to keep up with the faster runners. I knew this course from training and previous races. I knew that I would have to keep my pace in check. You cannot go out too fast in a marathon and not pay for it later.

At mile 6, we started the biggest downhill segment of the race for the next 10 miles. I told myself to breathe and relax and just run. There are a few uphills in this segment, but they are not horrible. I trained on hilly courses all summer, and it made me stronger on these hills.

After mile 16, the course flattens out until mile 22. If you run too hard down the mountain, you really suffer here. Your legs will feel like they are going uphill even on the flat areas. You have to just keep going and know that your legs will adjust. I had very vivid memories of this section from last year’s race (2016), and it was not as tough this year.

At mile 18, we make a turn at a little store and campground. This segment of the course has the most vehicular traffic. It is also a slight downhill with a few uphills. I kept on my fueling schedule of jelly beans and salt tablets every 4 miles no matter if I felt like I needed it or not. I knew I needed it. I also walked for a few seconds through each said station and drank water.

The field for this race was only 319 people, so when I made that turn, there were not many people racing in front of me that I could see. As I would get a runner in my sights, I made it my goal to catch up with them. For eight miles I did this. I ended up passing 9 other runners. This kept me occupied nicely.

Around 11:45 in the morning, it started raining lightly. I kept an eye on my footing. It was really not too bad until the last mile.

The one thing about this course is that there are a few good rolling hills toward the end of the race. Last year, I mostly walked them. This year, I kept running them.

To finish the race, you make a right hand turn into the parking lot where you parked your car in the dark earlier that morning. You run through a loop past your car. Mentally, you do not want to see your car at that point in the race. I did my best to not look for my car. I kept the runner in front of me in my focus. I kept watching my footing. It was getting slick and muddy. 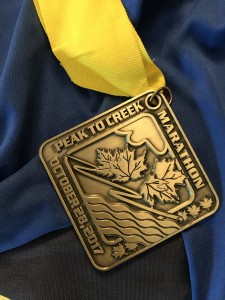 As you round the last corner, you see the finish line at the top of a little incline. Yes, you finish a downhill marathon by going up a little hill. Where’s the justice? (smile) 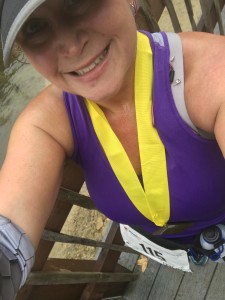 I saw the clock time, and I pushed to finish the race. My official clock time is 4:45:41. I finished #273 out of 319 runners. I was 14th in my age group out of 18 female runners. This was my second fastest marathon, and it was everything I had hoped it would be. 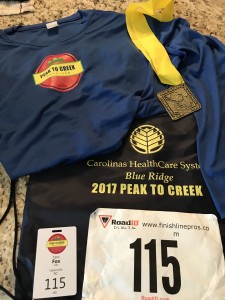 If you are looking for a great downhill marathon, check out Peak to Creek. It’s a Boston Qualifying marathon. You cannot beat the mountain views, the fall colors, or the creek that runs alongside most of the course. There are not a lot of people along the course. You will likely see wildlife. The aid stations are great and spaced nicely apart. It’s a fundraiser for Burke Recovery. 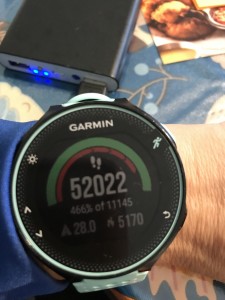