We’ve all heard little sayings throughout life that living life is a marathon and not a sprint. Well, I can say that I don’t have anything to compare to actually running a marathon. I ran my first marathon on January 17, 2015, in Charleston, SC. This was a long-awaited race for me. I have been running for two years, and I love running. I love running in races. I love how the running community treats one another. I have seen runners stop to help another runner. I have heard runners encourage one another on difficult runs. I have had friends come alongside me and encourage me and run with me on long runs. There is something special about the running community that I have not seen in a lot of other sports.

My husband is not a runner, but he has been supportive of my running lifestyle. When I started looking at dates and locations for my first marathon, I wanted a race that was fairly flat. I have completed 3 half-marathons, and all of them were hilly. I wanted something a little less hilly for a 26.2 mile race. I finally decided that Charleston, SC would be a great place to run a marathon, so I signed up. I had already been training and running every day. So I was prepared to up my weekly mileage and increase the distance in my long runs on the week-ends. I also had to stop running shorter distance races to keep my focus on the long run each Saturday. I missed my week-end running buddies at the races. But I had a plan, and I stuck to it.

Leading up to the race I had been doing a running streak, which meant I ran at least one mile per day. By race day, I was close to 400 days of my run streak. Most of these miles were outside in all kinds of weather. I ran in heat, cold, rain, sleet, snow, hurricanes, and everything in between. The hardest training run in preparing for the marathon was my 20 mile run in late December. That was a hard run mentally and physically. I knew that I could finish the marathon, and I had set a goal for my finish time. I worked diligently on my pace and endurance.

The morning of the race I was up early and ready to go to the start line. I had a quick breakfast in the hotel and chatted with a few other runners. I got my gear together and my bag to check at the start line. Who knew running marathon would take so much thought and preparation for physical needs along the way? I had a bag packed with a change of clothes because the race started on one end of Charleston and ended at another. I also had my runner’s pouch packed with chapstick, extra water, and several Huma gels for energy to get me through the race. The race course had water / gatoraide stops every two miles, and they had a few stations with snacks and gels. I enjoyed the experience of walking around the check in area and start line. I took pictures. I checked my bag. I realized I left my iPod in my checked bag. OOPS!

As the race time got closer, I was excited. I had decided that it would be ok to run 26.2 miles without music on my iPod, and I would enjoy the sites and sounds of Charleston and of the runners around me. The start line had around 4300 people lined up according to running pace time. We were a mix of people from young to old. Tall to short. All sizes. Some were running the full marathon and some were running the half-marathon. After the starting gun, it took a little time to get the mass of people moving. Being around the middle of the pack, we moved along at a quick walk until we got through the start gate. Even then, it took a little time to get enough space to really start running. But by the end of mile 1, we were running along nicely. My pace felt great. I felt great.

I ran like this for the first 11 miles. I only walked through the aide stations to hydrate. I stayed at the pace I had planned. I didn’t let the excitement of the race push me faster than I was comfortable with. But somewhere around mile 11 my stomach started hurting badly. Maybe it was nerves. Maybe excitement. Maybe the gels upset my stomach. Who knows. But I was dealing with some serious pain. I switched to the run/walk method, and eventually by mile 15, I was mostly walking. It hurt my legs more to walk than run, but my stomach would not tolerate the running. I continued walking, and I talked to the runners around me. I enjoyed the people along the course. I was sad when pace groups passed me, especially the one I wanted to be in to finish at the time I wanted to finish. I was toward the back of the pack at this point. One of the aide stations was out of water by this point, but I had water with me. I was fine, but some of the runners around me really needed the water at the aide station. We powered on, and we did get water and gatoraide at the next aide station.

When I hit 20 miles, I knew I would finish the race. I also knew that I would finish well after my goal time. I called my husband a few times along the way to let him know about my progress. I told him that I would finish. Mile 21 was a hard mile. But when I hit mile 22, something changed. My stomach quit hurting. And I was able to alternate some running with the walking. My pace got better, and I knew I had to beat the clock to get my finisher’s medal. The last finish time to get the medal was 6 hours and 30 mins. I knew I could do it. I just had to stay on pace and keep going. Once I was within 5 miles of the finish line, I knew there were a lot of loops through neighborhoods close to the finish line. I could hear music and cheering. That helped keep me motivated. I just put one foot in front of the other. I cheered on those around me. Those of us at the back of the pack really work on encouraging one another.

I saw the sign for mile 26, and I knew I only had .2 miles left to go to the finish line. At that point, I could not see the finish line. I had to turn a corner before I would see it. But I could hear the music and the people. I knew I was almost there. As I approached the finish line, I ran with my heart. My poor beat up body was trying to keep up with my heart at that point. I could see my husband waiting for me on the other side of the finish line. I crossed that finish line as fast as I could go, and I got my finisher’s medal! My husband took pictures, and he was ready to give me a big hug. I was elated that I did it. It took me 6 hours and 15 minutes to finish, but I did. I wanted a faster time, but I knew I did the best I could do that day.

After the race, I found out that there was a little problem with the lead car at the beginning of the race, and that I ran a little more than 26.2 miles that day. My app on my phone says that I did 26.95 miles. But that includes the space before I crossed the start line, and the space where I crossed the finish line. I loved the race itself. I enjoyed meeting runners from around the world. I met runners who were celebrating birthdays like me, and I met runners from cities not far from where I live. I also saw a local running friend that I did not even know was going to be there. It was an amazing experience, and I will do it again. I actually have my sights set on a race that is longer than a marathon sometime this year.

In the days after the marathon, I still continued my running streak. I watched my intensity, and I just ran for fun. I ran consecutively for 406 days, and then I fell while walking and injured my shin. For the past three weeks, I have done a lot more walking with less running. I have worked on strength conditioning for runners, and I am building myself up slowly after this injury. The initial x-ray did not show a fracture, but I have a follow-up appointment this week to see how I am recovering. At some point, I might do another run streak. For now, I am enjoying a rest day here and there.

What I have found out about myself is that I am stronger than I ever thought I was. I have learned that running is as much a mental process as it is a physical process. I have met a lot of great people who are much better runners than I am, but they encourage me daily.

Here are a few pics from my marathon: 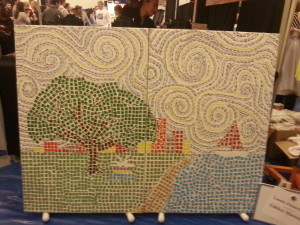 Mosaic at the Expo the night before the race 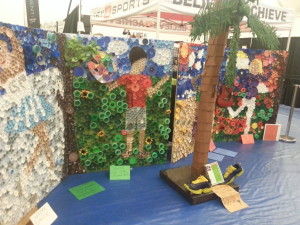 Loved this artwork at the Expo 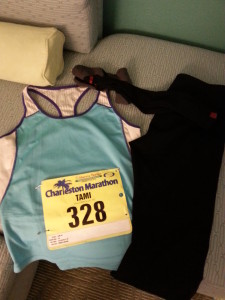 My Flat Runner the night before the race 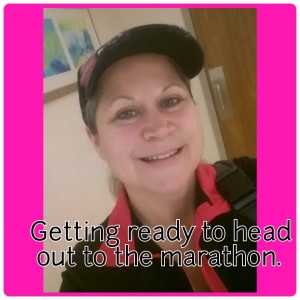 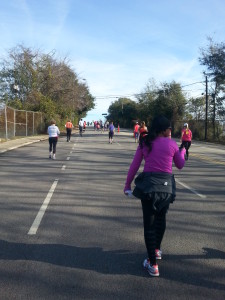 Biggest incline of the whole race up to cross a bridge 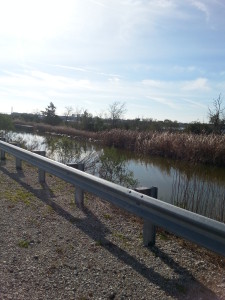 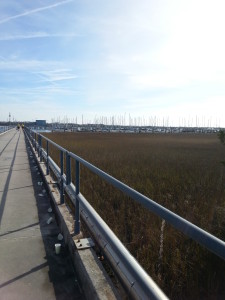 A little sightseeing trip out to the marina 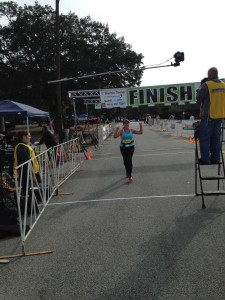 My Finisher’s Medal — hard earned and worth it!